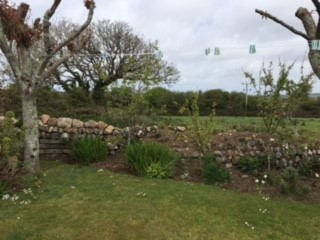 You would probably think that this blog is about what you call stone structures that we have bordering land / fields and gardens here in Cornwall. I can assure you really it’s not as they are Cornish Hedges, and this blog is about me renovating my Cornish Hedge in the garden at home and my upcoming run event called ‘The Wall’ which is running the length of Hadrian’s Wall (70 miles).

As I was working on the Cornish Hedge, removing nettles, brambles and the dreaded bind weed, I mused on the fact that the work I was doing and my event are both built on endurance, a lot of prep needed, equipment to be used, timescale and hopefully a positive end result.

I started work on my Cornish Hedge last year - it's brought up some interesting finds including stacks of horseshoes; a beautifully preserved Newlyn & Gulval Ice Works glass bottle with the marble intact; and from around the garden enamel bowls, farming hand tools, and a large cauldron which I have turned into a natural pond (this was a small dairy originally). It’s always good to get a bit of history, and the hedge has revealed that it used to have a gateway into the fields and was blocked back up again. When I first started, I spoke regularly with my friend Liz Prady about this. Liz was a keen gardener and a passionate volunteer for PLP, and had done a hedging course and some repairs, so she was keen to know what I had planned. We discussed planting, and I wanted to have cover on the hedge, as a lot of the stones had fallen and some of it had been poorly re-constructed. In the end it was decided that the Osteospurmum, Lampranthus and Fleabane were perfect for growing in and around stone work, and I also have been buying locally grown succulents from stands outside houses in the villages so there should be lots of colour and daisies. The native foxgloves will give some height and I’ve planted some varying mints for cooking with, the honeysuckle has been revived and ‘Mind Your Own Business’ is busy growing in the shaded area. I’m hoping Liz would like what I’ve done, very sadly she passed away last year and I have decided that my efforts on the Cornish Hedge will be in memory of her. Liz was an incredible triathlete, and my first coach, so I hope that this living memory proves what endurance can achieve.

It's peaceful working in the garden - curious robins are waiting for the opportunity for me to leave my digging for a moment, the female pheasant has taken to lifting my phlox plug plants, and there seems to be more blackbirds than ever this year, while a rabbit has eaten the first rosebud on a new plant. Not everything is perfect but it soldiers on, as I will do up in the north in June and as the hedge will too, after all it has been standing there for 120 years now.