These reconstructions have been drawn by digital artist Phoebe Herring and show how some of the sites in West Penwith might have looked at various points during their active lifespans. The heritage of West Penwith, as a living historic landscape is diverse, long standing and incredibly interlinked. We find that often sites are reused multiple times: lived in or used for a time then abandoned, only to be revisited at a later time period or periods. These drawings show a snapshot of a place in history from one time period based on the archaeological evidence we have available to us now. It is however, entirely likely that much more is hidden beneath the surface of these sites that future investigations might bring to light.

Bartine Castle is a dual period site, consisting of an initial Bronze Age (2500 BCE - 800 BCE) circular enclosure with circular stone edged features identified as barrows or cairns inside, later modified in the Iron Age (800 BCE - 43 CE) to be a larger version of much the same sort of feature, a circular enclosure with cairns inside. It seems unlikely that these smaller structures are hut circles. This reconstruction shows the site at night on the Autumn Equinox, the stars have been regressed to their natural position as they would have appeared in the middle of the Bronze Age.

This is a Bronze Age settlement consisting of some fourteen hut circles, nestled within their own associated prehistoric field system of irregularly shaped fields and clearance cairns which covers some 11 hectares. Eleven of the huts are single circles, two are two roomed and one is three roomed. Archaeological finds in the vicinity of the hut circles are consistent with domestic occupation, and ritual monuments such as cairns and an entrance grave lie within the surrounding field systems (with a number of stone circles and other burial monuments in the slightly wider vicinity). It would be easy to imagine a well settled community, firmly established within their local landscape.

This Bronze Age ring cairn enclosure or hillfort with three internal, smaller ring cairns was later modified into an Iron Age hillfort with a large external ditch and rampart encompassing the earlier Bronze Age one. A single hut circle inside the fort has been attributed to this later period of activity. The reconstruction shows how this second phase of activity in the Iron Age might have looked during the final stages of the site’s modification for reuse.

Caer Bran is a Cornish place-name meaning 'the fort of Bran'; 'Bran the Blessed' was a mythological warrior king of prehistoric Britain who figures in early Welsh myths (cf. The Mabinogion) and whose name is often associated with hillforts and high places. More mundanely, 'bran' is Cornish for 'raven', and an alternative derivation would be 'fort of the raven'.

A large circular Iron Age hillfort with four concentric ramparts consisting of banks and ditches, defensively configured (ditches outside the bank) with a complex entrance and multiple hut circles inside. It is thought that this striking hillfort was constructed on the location of a Neolithic hilltop enclosure although little evidence of this remains visible today. This reconstruction shows how grand it might have been, in its prominent position overlooking Mounts Bay during the height of its occupation in the Iron Age.

An Iron Age or Romano British (approximately 43 CE - 405 CE) courtyard house settlement consisting of a single, large courtyard house and an unusually large and defensive enclosure wall and ditch. Courtyard House settlements are particular to West Penwith during this time period but uniquely, this settlement also has a forge inside it attributed to tin production. It was re-occupied several times between the 2nd and 6th centuries CE and the forge was later modified during the medieval period to work iron. This reconstruction shows how it might have looked during the end of its Romano British occupation period.

The site is an Iron Age Cliff Castle known as Trereen Dinas, built on the promontory of Gurnard's Head. Comprising some 18 hut circles and a series of large defensive ditches and banks, which would have effectively cut off the rocky promontory from the mainland. This would have been an easily defensible area where people could live. It is not known if occupation was permanent or occasional here, but the buildings are all clustered on the leeward side of the rocks to shelter them from the prevailing winds.

Dating to the 19th century, these market garden plots on the clifftop at Kemyel Crease, between Lamorna and Mousehole, show up on the 1840 tithe maps, making them the earliest recorded garden plots in Penwith. They were referred to at this time as the ‘Garden of Eden’ and would have consisted of small walled garden plots, hugging this south facing cliff edge slope, often used for producing early spring flowers for the London flower markets that opened up as a viable market for such things with the advent of steamboats and the railway. They continued in use as garden plots for flowers and early potatoes until the mid-20th century. 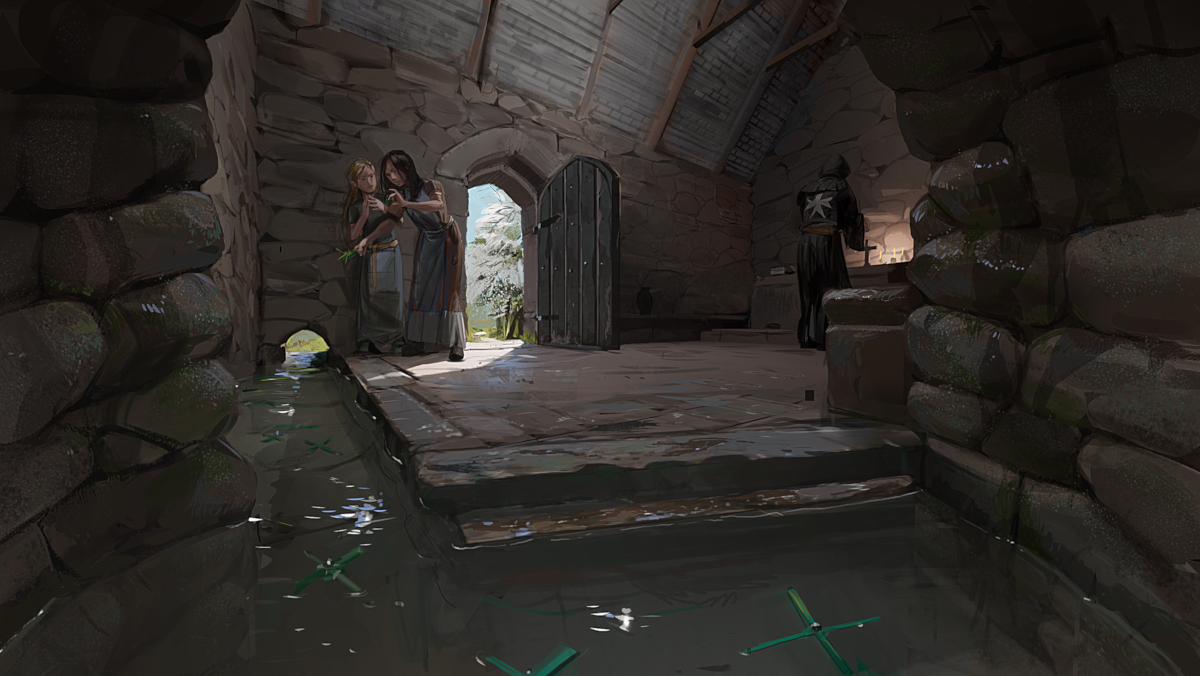 The building of Madron Baptistry is part of a Medieval complex which also includes the holy well and the chapel enclosure that sit on Well Moor, just outside Madron village. Originally dedicated to Saint Ithy, it became later dedicated to Saint Maddern and appears to have been part of a wider water management complex taking water from the well by leat not only to the chapel building, but further afield to the estate of Landithy (now a farm) and then later, onwards to Madron churchtown.

Water from the holy well was once carried by leat into the chapel building itself where it collected in a corbelled cistern and then ran out of the building along a small open overflow channel or leat. Long standing folklore associated with the well and its waters refer to healing properties, in particular around the feasts of Corpus Christi in the church calendar (May-June time); and more latterly recorded as a site for divination and guidance by young women, and a curative for children’s skin diseases.

This is a multi period late Bronze Age and early Iron Age roundhouse settlement on the shoulder of Sperris Hill overlooking the coast. This reconstruction presents an image of what the settlement might have looked like when the houses were first built in the late Bronze Age. This settlement is thought to be a seasonally inhabited one when people were grazing cattle on the higher land, probably in summer months. A series of drove ways ran between this higher land and the coastal fields and settlements to the north west, where the population and their animals would have spent the other part of the year.