What's in a soil? Digging trial pits with volunteers to find out! 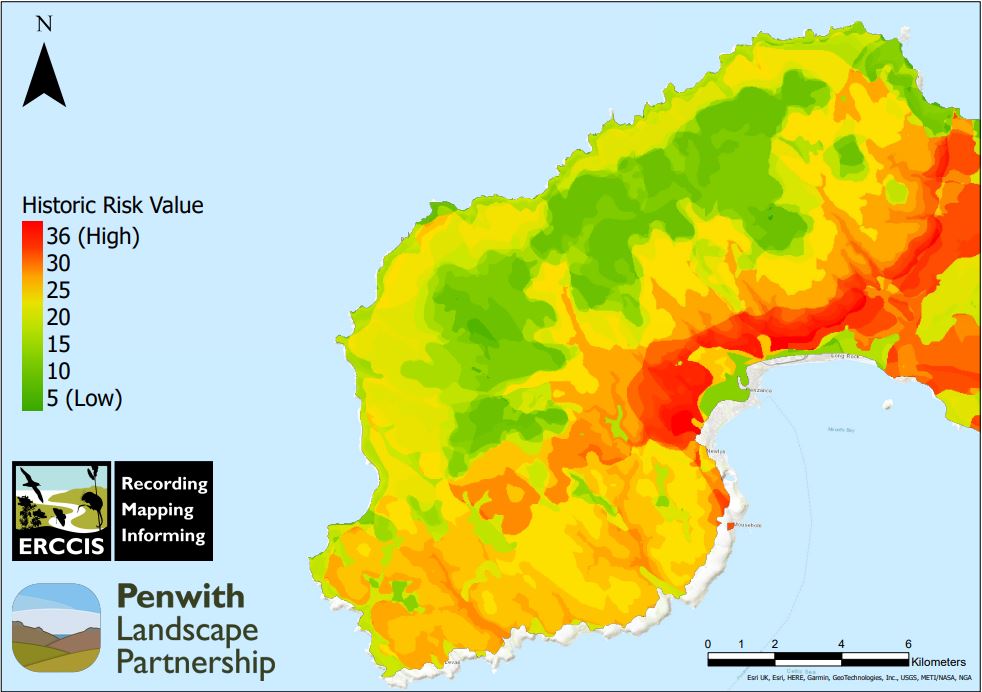 Over lockdown I worked on an interesting project that evolved out of a desire to come up with a model that allowed volunteers to do some digging but without cramming several into a small trench. The obvious candidate was trial test pits – the archaeological version of a ‘quick peek to see what’s going on’.  So, based on many conversations with farmers suggesting interesting going on in the soils of the area I decided to try and produce a map based computer model to predict agricultural damage to buried archaeology. Things like soil depth, soil type, hillslope and ground water movement have various impacts on the survival of buried archaeology; add to that the sort of ground disturbance ploughing and planting might cause in a farming landscape and you have all sorts of things that might affect survival of buried remains. A lot of these factors are recorded as environmental data, so layering these data sets up over a map seemed like an interesting thing to do.

The trial pits are us looking to see how accurate this modelling phase was, and therefore whether what we think might be going on is what is really going on under the ground. Questions we hoped to answer included: are upper hillslope sites quite well protected because modern deep ploughing seems less likely or less aggressive here, and are sites lower down more heavily farmed land completely destroyed?  Logic suggests that might be the case but are there factors that mess up that assumption? Describing that in practice, we are digging down to see whether either the natural weathered rock of the area that sits beneath the soil, or any archaeological remains in between soil and natural rock, are undisturbed or whether it looks damaged by plough strikes or plant roots for example. If this sort of disturbance is found, the odds are that any buried archaeology in that area will be quite damaged. If the soils above the natural or archaeological material is very deep, or there is little evidence for cultivation, it may be that buried things are better protected. In a landscape that has been farmed for 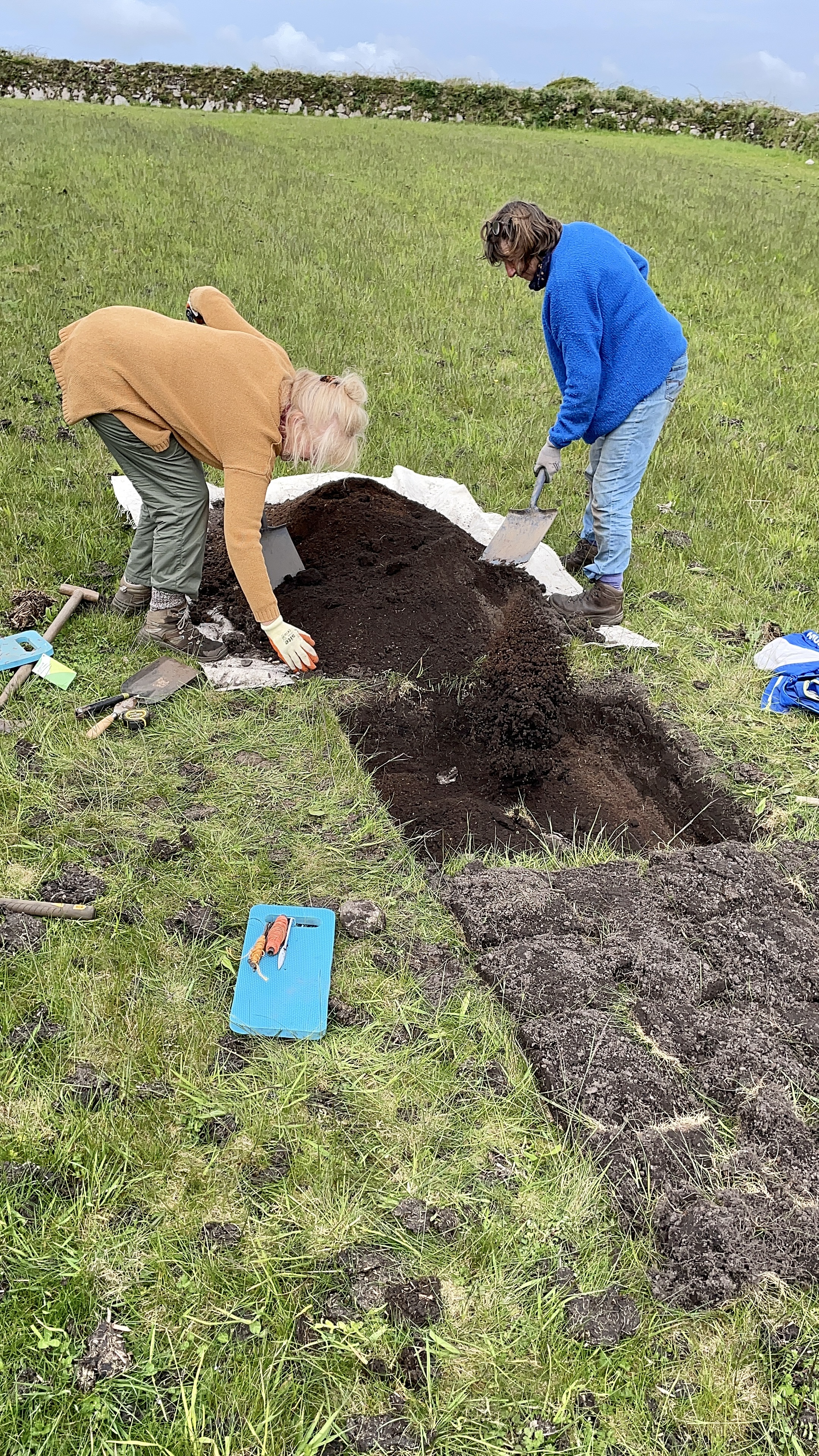 some 4000 years continuously, I was very intrigued to see what has been happening under the soil and what sort of impact through various time periods farming practices might have had. And, in true archaeological fashion it is often not always what you might expect.

In reality the active stage of the project, our trial pitting, only really came into play at the end of 2021 as various Covid safety measure were easing; but still, it is an interesting way to introduce people to excavating; a trench in miniature if you like! So out we set with spades and trowels and dug holes by hand one metre by one metre to see how far we got before we reached either natural rock, buried archaeology, or an archaeological horizon (such as a buried historic soil layer). We do not excavate any archaeological features that we find; such as post holes, wall foundations or possible hut floor surfaces; just make a note, look for evidence of damage (or not), measure and describe the soils we dug through, and then backfill the hole.

We have been out in all weathers - some good, some less so - first at Hillside Farm on the side of Bartinney hill, and now at Bosavern Community farm; and the soils could not be more different.

At Hillside we discovered that a recent deep ploughing episode had completely destroyed the soil structure, mixing together the more normal sequences of soils one expects to find. Normally there is a topsoil (dark, organic looking, full of roots and worms and stuff); then a subsoil, bit less dark, bit less rooty, often slightly different sizes of stone; then, below that, various other subsoils if activity has happened in the past and been preserved. Buried soils dating to a particular time in history is not uncommon - for example a medieval plough soil or a prehistoric soil - identified by objects found within them usually or archaeology cutting through them. Then, under everything ‘soil like’ you come to Natural, in the case of West Penwith this is often an orange gritty decayed granite clay, often referred to as rab. Usually, between the subsoil and the natural layer is where you find your archaeology; typically the older it is, the lower down it is in the soils. Unless like poor old Hillside it has been churned up by deep ploughing and you end up with a well mixed and completely trashed set of soils – looking like just the same soil all the way down.

That being said, anything in those churned soils will still be there, just all mixed up, so you do still get a snapshot of what had been going on in a place from just the soil.  Worked flints suggest prehistoric activity, various ages of pottery indicate activity relating to their respective time periods. In an agricultural landscape because organic material has been added to the soil to fertilize them, it is common to find all sorts of things in the soil brought in by accident with manure from the wider area; not just things from that place. Pottery from the Victorian era might for example indicate people being active there in that time period from a nearby house or similar, but it might more likely represent night soil from local 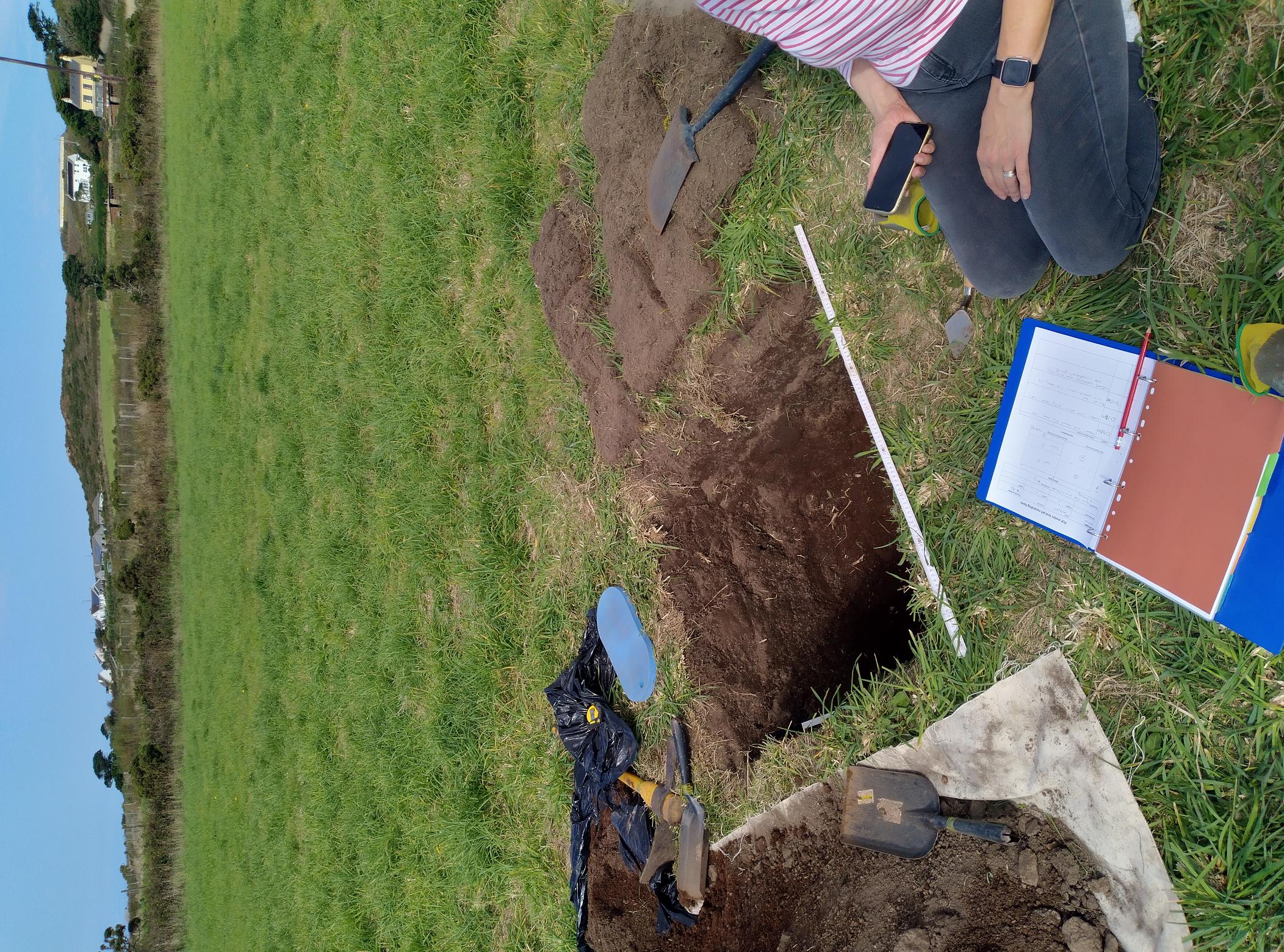 towns which was scattered on fields at that time. Similarly, beach pebbles added accidentally when seaweed was added to improve soils can be found - all indications of farming though time. Who hasn’t found a clay pipe stem or bit of brick in their garden or in a field they were walking through for example?

And so, we found flint and stone and a few buried prehistoric features at Hillside, where the overall landscape character is that of a buried Prehistoric fieldscape and settlements; largely assumed to be Bronze Age in character with the hilltop enclosure above on Bartinney and the round houses in the vicinity dating to this period. The flint was not a surprise but the age of the flint was, with a lot of it looking like Neolithic rather than the expected Bronze Age – all very interesting and one to add to the Cornwall's Historic Environment Record. Without digging up any archaeological features, and knowing the land has been quite well damaged by ploughing, we still get a snapshot of what might have been happening in the area.

In any case, our adventure continues at Bosavern Community Farm who have kindly given us permission to look at their soil; which, in complete opposition to Hillside, is very deep and full of bits and bobs dating from the 19th century back through time to the Medieval period. So far the top soils are about double the depth of that at Bartinney, evidence of a great many years of continual manuring of the soil for agriculture. Despite the typical Medieval and Post Medieval flavour of the soil here, which very pleasingly retains it’s layered structure, we did find quite a deep preserved Prehistoric soil (we think) right above the natural rock (although we have not found anything Prehistoric yet). That being said, we were very excited to be shown a chance find of a Prehistoric spindle whorl, probably Iron Age in date, found on the farm which hints at the likelihood of a settlement dating to that period being on the land somewhere before the Medieval one was built; something which has not been noted down to date.

And so what is in a soil? Well, (apart from worms) all sorts of stuff, just waiting to tell us what has been going on! A sneaky peek into Penwith's past.